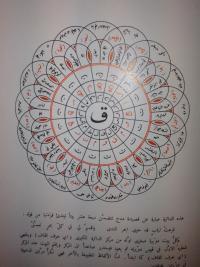 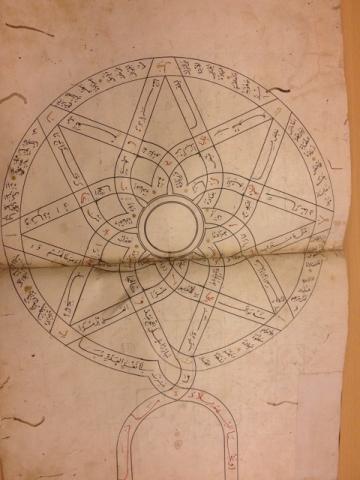 “Ergodic” describes works of verbal art that set out the rules for their own use and involve readers in the construction or coproduction of the artwork. These characteristics are fundamental to a scattered body of Arabic verbal-and-visual artworks whose existence has been overlooked by mainstream scholarship. Their principle is to arrange one written text so that the reader can generate another text or texts from it. This is done in ways that include colour coding and laying out the words inside naturalistic or geometric frames. Fully-fledged ergodic literature was produced from the twelfth to the nineteenth century in Egypt, Islamic Spain, North Africa and the Levant in the medium of calligraphy. When printing became commercially established in Muslim countries in the nineteenth century, one fifteenth-century Arabic ergodic text was typeset and published in Calcutta, Cairo and Aleppo, but others continued to be composed, copied and published in manuscript.

(i) The basic task of the DPhil would be to put together and document a core corpus of this ergodic literature, plotting its distribution in time and space and its circulation, and to investigate its literary, visual, codicological and performative features. What are the contents of the items in the corpus (e.g. poetry, maqāma, autobiography)? How do text and paratext interact in them? How were they made? How were they used?

(ii) Over time, in the course of copying and rebinding, the original structure of some pieces was distorted, which limited the ways in which they could be used subsequently. As presentation pieces and sometimes ego-documents, they self-document their original purpose and intended audiences. Yet even with reduced or misunderstood functionality, they continued to circulate and to be imitated. In what ways might this be significant?

(iii) With the displacement of manuscripts by an Arabic print book culture in the twentieth century came the separation of the study of the visual and verbal arts into discrete disciplines and the vesting of authority in stable texts and a largely accidental canon of authors and genres. Ongoing revisionist literary, cultural and social history scholarship for the periods in which ergodic literature was produced is reshaping our ideas about Arabic literature.The development of Arabic book studies in particular challenges us to rethink canonicity and its parameters. Can the manuscript and print history of ergodic literature help us to do so?

The primary manuscript and print materials for the topic are limited in number, are available in Oxford for study in digitised form, and are easily accessible for physical codicological examination, mainly in European libraries. For their contextualisation, secondary scholarship and a wide range of primary materials can be accessed online through Oxford’s Bodleian Library SOLO interface, an advanced bibliographic research tool linked to the BnF’s Gallica portal. The Bodleian’s own specialised libraries and collections include the Oriental Institute Library and the Sackler Library of Eastern Art collections. Other Oxford resources are the Ashmolean Museum’s collections and curators and the Khalili Research Centre for the Art and Material Culture of the Middle East.

Candidates are required to apply for the DPhil in Oriental Studies by 11 January 2019. Candidates should hold a good BA (2:i or better) and a Master’s degree with Distinction or equivalent in a relevant discipline or disciplines, and be able to demonstrate a good general knowledge of medieval Arabic literature, especially poetry, and of recent scholarship in the field. Some familiarity with Arabic codicology, paleography and book studies is desirable, but basic and further training will be provided in Oxford and on recognised courses outside Oxford. A reading knowledge of one or more European languages besides English and of another Middle Eastern language would be advantageous.

The scholarship will cover tuition fees, colleges fees and provide a living allowance at Research Council rates. Candidates from all backgrounds are welcome to apply, although the Leverhulme Trust has a preference for supporting Home/EU candidates.