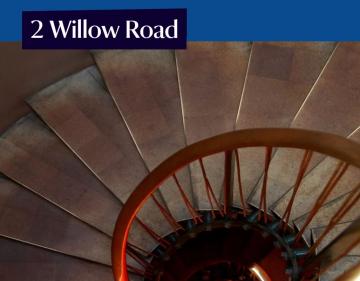 This project examines the moment when ‘high modernism’—the formal experiments in literature, art and music of the early twentieth century—moved into everyday life in the middle of the century. Much academic research over the last twenty years has been dedicated to showing the engagement between specific writers and mass culture. However, the extension of modernism as a style and a set of values into everyday life, especially the everyday life of the home, is still uncharted territory. Though related research has been undertaken (eg Harris, Romantic Moderns (2010), Olson, Modernism and the Ordinary (2009), Spurr, Architecture and Modern Literature (2012)), there is as yet no study of the way an international, experimental style in the arts was popularised and domesticated.

2 Willow Road in Hampstead was designed in 1939 by the architect Ernö Goldfinger for himself and his family, and acquired by the National Trust in 1994. It is a rare example of domestic modernism open to the public, with an interior largely preserving the interior decoration of the architect and his family. As a crucible of international modernist ideas, it had a major effect on the British architectural and cultural landscape, since Goldfinger was also the architect of the Grade II* listed council blocks, Balfron and Trellick Towers. The collaboration represented by this studentship provides an ideal opportunity to combine knowledge of the material culture of an iconic modernist building with academic research in modernist studies.

This project sits at the intersection of literary critical and cultural historical approaches to modernism. This project’s literary critical element turns on the centrality of written representations of modernism, especially architectural and domestic modernism, in the mid-twentieth century.  These may be literary works, but they will also be periodical and newspaper articles, diaries and letters, and policy documents. In the middle of the century, a number of early twentieth-century writers moved into public roles to define and direct national culture. This project analyses the imaginative construction of modernism as it takes its place in a national narrative.

The modernist home also provides an optic through which to analyse the development of the heritage sector itself - a product of the mid-twentieth century and the stories that period wanted to tell about its national history. Those stories largely excluded modernism at just the moment modernist style became part of mass culture. The National Trust’s modernist properties and collections require us to rethink what national heritage means in Britain today.

The project is supervised by Dr Rebecca Beasley (University of Oxford) along with Lucy Porten and Leigh Sneade (National Trust).