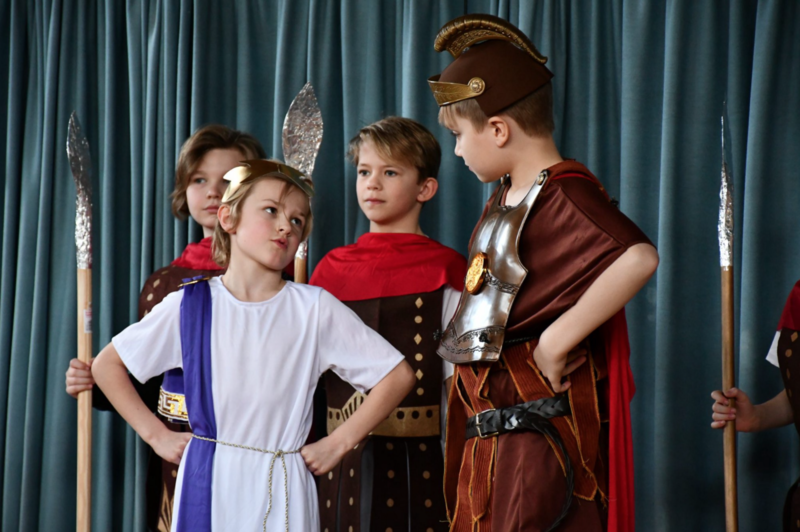 This blog post is by Oxford classicists Dr Arlene Holmes-Henderson and Katrina Kelly:

Recent research from the British Council has shown that many children aged 7-11 in English schools receive only ‘ad hoc and minimal’ language teaching, if any at all. Timetabling constraints, competing priorities and lack of funding for initial teacher training and professional development as well as inadequate support have all played a part in exacerbating the challenges that face the teaching of languages in the primary phase. In 2014, ancient languages were introduced to the National Curriculum at Key Stage 2 (KS2). This blog explores how knowledge exchange between modern and ancient language teaching practitioners might improve the quality of languages education through the sharing of expertise and insight.

At the primary stage, teachers do not need to be language specialists but non-fluency in a modern foreign language can lead to a lack of confidence when teaching. The Research in Primary Languages 2019 White Paper, for example, documented that ‘62% of responding schools identified improving staff languages proficiency and/or boosting staff expertise and confidence as a continuing challenge’.

The result is often negative student perceptions of the target language, and limitations on student learning. In contrast, speaking and listening are optional components of ancient languages. When teaching Latin and/or Ancient Greek, discussion and learning usually takes place in English; non-specialist language teachers report that this reduces anxiety on all sides. The similarity of phonic systems between Latin and English (there are no silent letters in Latin) develops confidence and understanding of spelling and pronunciation for teachers and pupils alike. Ancient languages offer a clean slate for everyone, and, with the right support, basic Latin in particular can be easily introduced at KS2.

Language Trends (2020) found that 70% of primary school class teachers had delivered modern languages without specific professional development within the past year. There is currently a great deal of free support and teacher training available for those who want to introduce ancient languages. Workshops are provided by researchers at the Classics in Communities project and charity staff at The Iris Project and Classics for All, specifically for teachers with no prior subject knowledge. With expert help, teachers can master enough Latin to teach primary pupils with only a couple of days’ training: 70% of participants in a day-long workshop with Classics in Communities said it was ‘very likely’ that they would consequently start teaching Latin in their primary schools. Further subject knowledge enhancement and resources are available online through the Cambridge Schools Classics Project, the Primary Latin Project, Hands Up Education and The Latin Programme.

So why might a primary school choose to introduce ancient languages? In England, Latin and Greek have statutory support and Dr Holmes-Henderson’s research suggests that Latin has a beneficial impact on the L1 development of English native speakers and can be used ‘as an intervention strategy for learners performing below age-related expectations in literacy’. You can read more about this in the Oxford Humanities article for the Talking Languages campaign.

Fears that ancient languages are ‘dead’ and therefore educationally redundant can be allayed: the aim of teaching Latin is not to provide handy phrases for ordering ice creams on holiday (although ‘gelato’ does come from the Latin adjective ‘gelidus’, ‘frozen’!) but, in part, is to develop strong foundational skills for learning Romance languages, whose roots are approximately 80% Latin-derived, and to unlock significant gains in literacy development. There are additional benefits too: ancient myths and stories, art, archaeology and history are embedded into the teaching of Latin and Greek within textbooks such as Minimus and Basil Batrakhos and it is this cross-curricular richness that captures and sustains students’ interest and imagination.

At a strategic level, Classicists are working in collaboration with Modern Languages colleagues more efficiently than before. For example, since the publication of the British Academy’s Towards a National Languages Strategy document in 2020 (note – the divisive terminology of modern foreign languages vs ancient languages is now gone, thank goodness), Dr Holmes-Henderson now sits on the British Academy’s National Languages Advisory Board to represent ancient languages. Classicists and Modern Languages researchers collaborated on the Modern Languages Outreach and Engagement project and we’re working together as part of the Future of Languages project. This ever-growing network of researchers, advisors, teachers and academics are committed to raising the profile of languages education (broadly defined), lobbying for the importance of languages with key stakeholders and learning from each other at all levels of education. By working together, we will all benefit.

Dr Arlene Holmes-Henderson is a Senior Research Fellow in Classics Education and the Outreach Officer of the Classical Association. She is an experienced teacher of Latin, Classical Greek, Classical Civilisation and Ancient History in the secondary sector and advises a number of international governments on curriculum design and assessment reform in the areas of languages and humanities education. She trains teachers in the UK and abroad and is the co-editor of ‘Forward with Classics: Classical languages in schools and communities’ (Bloomsbury 2018).

Katrina Kelly is a Research Assistant in the Faculty of Classics at the University of Oxford where she supports the work of the Classics in Communities project. She is the Branches Officer of the Classical Association and the Chair of the Lytham St Annes branch, which she established in 2014. A former teacher of Latin, Classical Greek and PSHE, she is also studying for an MA in History.