Four scholars are following their dreams to conduct research at Oxford thanks to scholarships funded by investment management firm Baillie Gifford and the Arts and Humanities Research Council. From early dog domestication to grading in German schools, the DPhil scholars are developing new insights in a wide range of fields in the Humanities, and they are enjoying their university experiences.

The gift for scholarships from Baillie Gifford to support postgraduate studies and research has been matched by funding from the AHRC to provide fully-funded DPhil scholarships to 12 scholars, with four new students starting each year until 2021-22. Baillie Gifford’s £600,000 donation also established the Baillie Gifford Writing Partnerships Programme, which has paired nearly 200 graduate students and postdoctoral researchers in the Humanities with a partner for regular writing meet-ups. 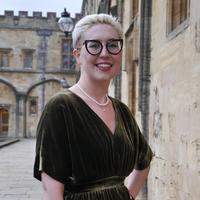 Now, with the first year of the new scholarship scheme drawing to a close, the four inaugural Baillie Gifford-AHRC scholars spoke to us about their experiences.

Joana Perrone (pictured, left), of Wadham College, is researching femicide - the killing of women because of their gender - in Brazil. She said: “I have developed a dataset that contains all femicide cases reported to the Brazilian media since January 2019, and I am drawing very interesting data from the reports.

“Before I was awarded the scholarship, I was self-funding and had realised I would probably have to suspend my studies due to financial constraints. I want to thank Baillie Gifford for supporting Humanities scholars and our research, which is often overlooked but has massive social, political and cultural impact.”

Gonzalo Linares Matás (pictured, right, and holding a 30,000-year-old horse tooth during fieldwork), of St Hugh’s College, is studying human-canid interactions during the Ice Age. His scholarship has allowed him to work with five teams on projects which he expects to yield at least six research papers. 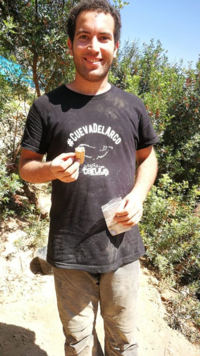 He said: “My particular DPhil topic is exploring the relationship between organic refuse management and early dog domestication among hunter-gatherers of the Late Pleistocene.

“Studying this topic in depth is important because it will expand our knowledge about the affordances and constraints of living in sedentary campsites during the Ice Age – for the first time in human history – and the relationship that such living arrangements had in the domestication of dogs.” 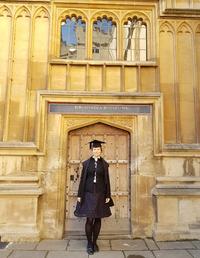 She said: “In my view, for a balanced society it is very important that fields such as Art History and Oriental Studies find their rightful place in the academic and public spheres.

“Oxford’s facilities, particularly the Bodleian Libraries and Ashmolean Museum, greatly enhance my enthusiasm and provide me with the most stimulating and enjoyable work spaces.

"Being in this environment is an awe-inspiring and holistic experience that goes beyond academic benefits. Studying at Oxford where I can conduct the most cutting-edge research in my field means I can pursue my dreams. The Scholarship made this possible for me.” 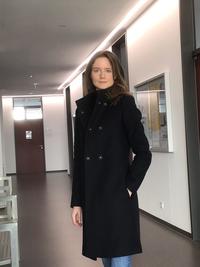 Noëlle Rohde (pictured, right), of St Catherine’s College, is focusing on the practice of grading in German education. She is carrying out fieldwork at a comprehensive school as a way to explore the growing trend of social quantification.

"From audits to self-tracking, from human resource management to the Chinese credit score - numbers are increasingly being employed in relation to phenomena which were previously thought unquantifiable," she explained.

"What we are yet to understand is how individuals engage with 'their' numbers and, for example, how they impact their identity. Research on grading offers an ideal window onto these vexing questions and it is an important step towards an ‘Ethics of Numbers’."

Baillie Gifford and AHRC Scholars receive £30,000 per year towards tuition fees and living expenses. Click here for more information on scholarships and student support at Oxford.