Meet the pioneering songwriter on a mission to prove that opera is for everyone.

What do you think of when you think of opera? ‘I think we’re past the “fat lady with horns” now’ says Dr Toby Young, the Gianturco Junior Research Fellow researching Music and Philosophy at Linacre College.

But while other genres of classical music have been undergoing something of a renaissance, opera remains a niche interest, hampered by the perception of it as a difficult genre reserved for the privileged few.  This is something that Toby, a true music lover who appreciates everything from 13th-century Armenian folk music to the grime artists recently so instrumental in Jeremy Corbyn’s election campaign, is determined to change. 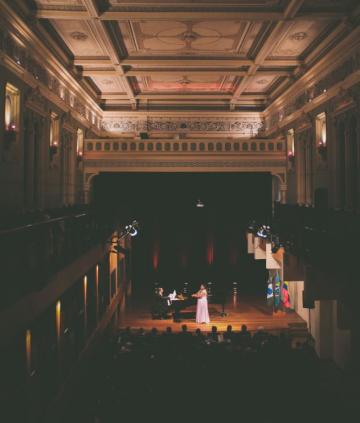 ‘Opera was for a long time very much the music of the people’ he says, ‘Now stereotypically the audience is white, middle-aged and fairly wealthy.  I want to say that opera is for everyone, but at the moment it clearly isn’t.’

Nobody could be better placed to change this. In addition to his academic work, Toby is also a songwriter exploring the boundary between pop and classical music. As well as writing for the London Symphony Orchestra and King’s College Cambridge choir, he has worked with a variety of big names including drum and bass group Chase and Status, Duran Duran and the Rolling Stones (‘They’re just amazing musicians, Mick is just an amazing performer’).

As part of a Knowledge Exchange Fellowship with The Oxford Research Centre in the Humanities (TORCH), Toby has been working with McCaldin Arts, a group of professional opera singers, to explore precisely what it is that makes opera so difficult to engage with.

It also is not a question of opera being especially removed from the rest of modern music. In the course of workshops with singers from a wide range of genres, Toby and his partner at McCaldin Arts, Clare McCaldin, discovered something rather surprising. Technically speaking, there is actually very little difference between opera and pop, with singers from both genres making use of a similar set of skills. A lot of the distinctiveness simply lies in how a piece of music is presented; for example, whether there is a piano accompaniment or a drum and bass beat playing in the background.

Actually, according to Toby, ‘Pop and opera aren’t that different after all.’

It seems opera’s problem is far more complex; often it’s simply the case that people are raised in certain cultural worlds and are unwilling to stray out of their comfort zone.  This is not helped by the fact that traditional opera, with its lengthy run times and big, over-the-top subject matter, can often seem out of touch with modern people’s everyday lives.

‘Especially now, as society speeds up, we’re dealing with people’s short attention spans. Opera requires you to slow down a bit.’

‘It’s not so much that they don’t understand it. But people haven’t experienced a good one, or else they’ve seen one that put them off for life. You know, they went with school, and they just went, “Why am I seeing this slightly weird hammy thing with someone just standing and singing at me?”’

‘I think when it’s done well, opera is such an effective, emotional, moving and wonderful thing. When it’s not done well, it can be really strange, off-putting and distancing. It’s such a fine balancing act between a really amazing effective thing where you leave there and go, “wow, that has inspired me in so many ways” versus something where you leave going “Oh my God, that was a waste of three hours of my life.”’

Work has been done by groups such as Opera Up Close and Silent Opera to bring opera to communities that might be unfamiliar with it, but Toby thinks it requires more than just playing a traditional opera in a new setting to truly engage people. He believes that opera also needs to create a fresh sound that is closer to music people recognise.  This is something he hopes to work on in the future, drawing on his experience of popular and classical songwriting to create an original piece that fuses elements of both.

Despite all the challenges, Toby is convinced that opera can be a vital, relevant genre, in a unique position to hold up a mirror to the problems modern society faces.

‘There’s no other art form that’s so complete. You have interesting visuals, you have the acting, and you have the dramatic music all coming together in a truly unique way.’

‘Because it has to work so hard to draw you in, when you’re drawn in I think you’re hooked.’