Des Oliver is a composer and has recently completed his doctorate in composition and critical writing at Worcester College, Oxford. He is currently the curator for the Oxford Music Faculty's Sounds of South Asia Series. Des went into music because he is creative, but he says “it could have been anything painting, music, architecture, anything that involved creation.”

The Sound of South Asia series is a new edition to the events calendar at the Faculty of Music. Des tells me that it “came out of a long journey with many legs”. 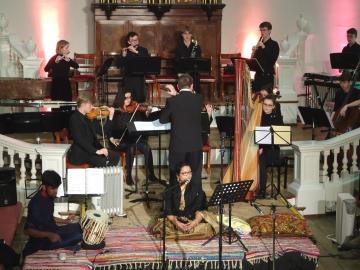 During the study for his DPhil in Composition, Des had to complete both a thesis and a portfolio of work. His thesis concentrated on a twentieth-century French composer called Olivier Messiaen and on post-colonial discourse in art, particularly the ethics of cultural appropriation by musicians.  It was important to Des as a way to consider and challenge his own cultural appropriation and to open a dialogue as to why artists do it.

The final part of his thesis was to consider cultural appropriation from a different view oiunt from his own, as a western classical composer, so he contacted Dr Shruti Jauhari an Indian Hindustani Vocalist. This meeting led to the formation of the Sounds of South Asia series and Dr Jauhari’s performance in the first concert.

The first concert of the series ‘appropriation, cross pollination, cultural transmission’ took place on Friday 28 April at the Holywell Music Room. This was formed on three parts. First,

Maurice Delages ‘del Quatre poèmes hindous’ ("Four Hindu poems"), each named after a city in India that he had travelled through during his tour of the country in 1911-1913. The third, was a traditional Hindustani works performed by vocalist Dr Shruti Jauhari. Between these two pieces was a composition of Des’s own, ‘Malli Kamoda’, which was created to act as a bridge between the Western composition and the Hindustani, so pulled in aspects from both.

“The most interesting part of setting up this series has been seeing how very different artists share similarities, how different traditions like to push the envelope and challenge themselves.” Des says.

“I was also overwhelmed by the amount of interest we have had in the series from BME students around the University and from schools throughout Oxford who have been in touch to set up workshops around this topic.”

Des’s next aim is to get funding in order to record his ‘Malli Kamoda’ piece that was performed at the concert in February so that more people can experience the mix of cultures that the piece covers. He is also writing a monograph based of his thesis, concentrating on Messiaen and cultural appropriation in music.

You can find out more about Des and his work here: http://www.desoliver.com/