Have you ever found yourself pages-deep in a Google search, desperate for a quick fix for your medical woes?

Google may be a more recent invention, but tips, tricks, and tonics for even the quirkiest of ailments have been around for hundreds of years. And Professor Daniel Wakelin, the Jeremy Griffiths Professor of Medieval English Palaeography, has been digging up the most disgusting treatments for a new book on medieval remedies.

Professor Wakelin and a group of master’s students have been studying the Bodleian’s collection of medieval manuscripts to collect the word-of-mouth, definitely-not-scientifically-proven medical advice that was passed around 500 years ago. A collection of the forty-eight most eye-watering remedies will be published in a new book in November. 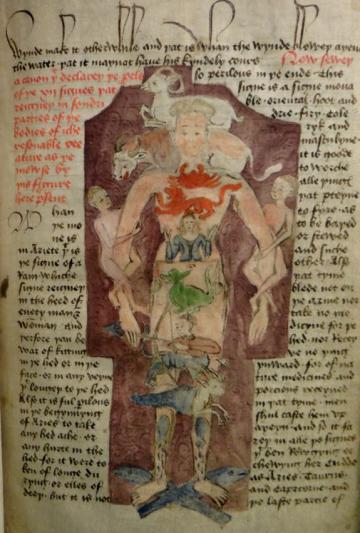 Illustration of a ‘zodiac man’ from a medieval medical book.

The glimpse the book gives into medieval medicine isn’t pretty. The remedy for gout recommends plucking, cutting open, baking, and pulverizing an owl, before gently rubbing it over your wound.

Professor Wakelin is keen to emphasise that the collection is the furthest thing from medical advice. “We chose the ones that were the most scandalous and the most disgusting,” he says. “So definitely don’t try them at home.”

A sensible piece of advice—unless you particularly fancy heating eight-day old urine over a fire and washing your face with it (apparently, medieval spot-sufferers hadn’t yet discovered Clearasil).

This often means that, along with the medical advice, there are a few more ambitious suggestions. Professor Wakelin’s favourite is a remedy to make somebody fall in love with you.

“Totally unethical,” he says. “But intriguing.”

It also calls for a strong stomach. According to the remedy, all you need to do is mix your own sweat with the shavings from the back of your feet and some of your own sun-dried dung. Take a swig of that concoction, and whoever catches your eye will be yours. I hope they’re worth it.

Although the book only features the freakiest, most of the remedies that the researchers found weren’t so outlandish. Interestingly, some of the remedies might even be found in health stores today, such as fennel for a stomach upset.

This shows us, then, that there’s more to the medieval world that meets the eye.

“I think the remedies show us a lot about the medieval worldview,” Professor Wakelin says. For example, there are many remedies for blindness. “Sight takes so much expertise to fix, people must have been despairing when their eyes went wrong.”

But the solutions to such sight ailments sound eccentric to the twenty-first century reader. One suggests mixing sheep dung with vinegar and smearing it in your eyes. We definitely don’t recommend trying that one, but this perfect mixture of comedy, revulsion, and curiosity is what Professor Wakelin hopes people will enjoy.

If your appetite has been whetted (or if you’ve lost it completely), keep an eye out for Revolting Remedies from the Middle Ages, published by the Bodleian Library in November. There will also be a Bodleian exhibition on medieval book design to accompany it, Designing English, featuring an array of weird and wonderful medical images.

Professor Wakelin’s post, and his fascinating work, is funded by the kind donation of Mr. and Mrs. John and Jeanne Griffiths, in memory of their son, the scholar of manuscripts Jeremy Griffiths. The project could also not have been possible without the impressive palaeography work of students on the MSt course: Hannah Bower, Cosima Gillhammer, Justine Gomes, Annaliese Griffiss, Paoula Sobanda, Anneli Strutt, and Sian Witherden.