Since the first films emerged in the 1890s, in societies of all eras, sizes, and ideologies, movies have had us enraptured.

And Professor Catriona Kelly, Professor of Russian at New College, is exploring how one Soviet film studio has contributed to this long and colourful world of cinema—both on- and off-screen.

Lenfilm, a film studio based in Leningrad, was the second-largest production company in the Soviet Union, after Mosfilm, the Moscow studio. At its height in the 1960s and early 1970s, when a cluster of young filmmakers began making adventurous new movies, it produced up to fifty films a year. These ranged from The Amphibian Man (1962), a science fiction movie about a man with shark gills, to A Boy and a Girl (1966), a film about two young people’s holiday relationship that was banned immediately after its release. 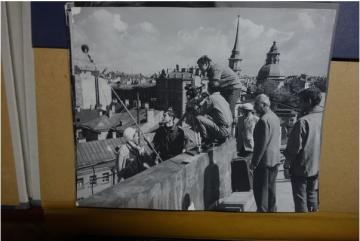 Through archive material and oral history interviews, Professor Kelly is using Lenfilm, which was a vast film factory with over 4,000 employees, as a window onto life in the USSR.

While amphibian-like men swam around onscreen, Lenfilm employees were working collectively on the filmmaking process, dealing with budgets, equipment supply, and censorship. Exploring how the organisation worked gives us an unusual angle on the role of the Communist Party in the Soviet Union.

“The Party wasn’t just an ideological censor. It was the only management structure that united the whole studio, from location to wigs and makeup. When it disappeared, the studio fell apart,” Professor Kelly says.

Looking at the institutional history has also thrown up some examples of more familiar, Hollywood-esque problems, like people getting drunk in the film processing laboratories, or storming off set because the director swore at them.

But despite the occasional angry outburst, Lenfilm produced many successful films. These included crowd pleasers like the all-singing, all-dancing Wedding in Malinovka, a comedy operetta set during the Russian Civil War, but also films that were more serious or experimental in tone, such as Aleksei German’s My Friend Ivan Lapshin (1984).

“The films were often characterised by a quasi-documentary, neorealist approach to Soviet society, and some of them were quite hard-hitting,” Professor Kelly says. 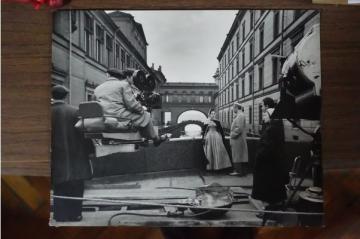 A production still from Vitaly Melnikov’s Mother’s Got Married (1969).

One of her favourites is Gennady Shpalikov’s A Long Happy Life (1967), a love story about a man who hitches a lift on a passing coach and a woman he meets on it.

At the peak of their popularity, hit films like Amphibian Man were watched by up to 100 million people. Some, like Grigory Kozintsev’s Hamlet and King Lear, or, more surprisingly, Sergei Mikaelyan’s Bonus (1975), about workers in a Soviet factory, garnered appreciative audiences and prestigious prizes across the Soviet Union and abroad.

In the early 1970s, audience numbers began to drop, but films remained popular—and some of them still are. “TV reduced audiences in cinemas, but people also avidly watched films on TV. Indeed, they still do, and popular Soviet films are widely watched on YouTube,” Professor Kelly says.

Professor Kelly has first-hand experience of this appetite for Soviet films. Throughout her research project on Lenfilm, she has shown some of the studio’s films to audiences in Oxford, and even hosted some Lenfilm directors in the city.

“These events are popular with members of the public—they’re interested in seeing something they can’t see in a commercial cinema,” she says. So far, they’ve had visits from Konstantin Lopushansky, Vitaly Melnikov and Yuly Fait, and are planning more showings for the upcoming year, which is the centenary of the Russian Revolution.

As well as offering an insight into the history of the USSR, Professor Kelly thinks that production studios like Lenfilm have an important impact on Russia today. “Film was an enduring part of popular culture,” she says.

Curious? Watch Wedding in Malinovka for yourself here.