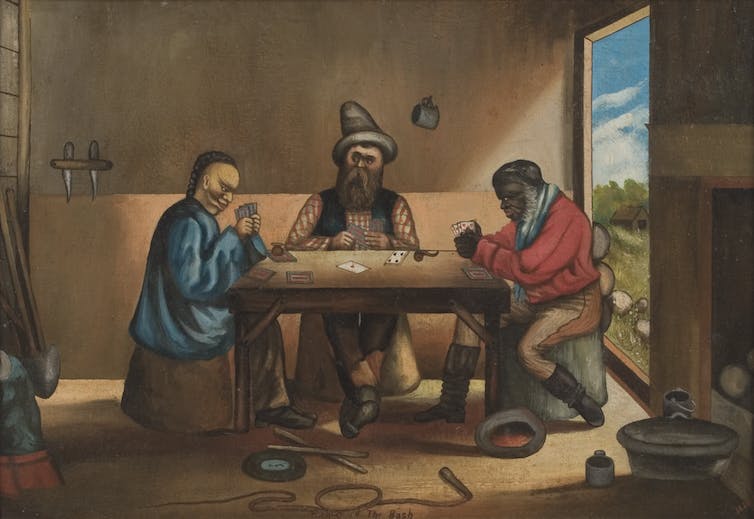 This year is the 170th anniversary of one of the most significant events in world history: the discovery of gold at Sutter’s Mill in Coloma, California. On January 24, 1848, while inspecting a mill race for his employer John Sutter, James Marshall glimpsed something glimmering in the cold winter water. “Boys,” he announced, brandishing a nugget to his fellow workers, “I believe I have found a gold mine!”

Marshall had pulled the starting trigger on a global rush that set the world in motion. The impact was sudden – and dramatic. In 1848 California’s non-Indian population was around 14,000; it soared to almost 100,000 by the end of 1849, and to 300,000 by the end of 1853. Some of these people now stare back at us enigmatically through daguerreotypes and tintypes. From Mexico and the Hawaiian Islands; from South and Central America; from Australia and New Zealand; from Southeastern China; from Western and Eastern Europe, arrivals made their way to the golden state.

Looking back later, Mark Twain famously described those who rushed for gold as

“The only population of the kind that the world has ever seen gathered together”, Twain reflected, it was “not likely that the world will ever see its like again”.

Arriving at Ballarat in 1895, Twain saw first-hand the incredible economic, political, and social legacies of the Australian gold rushes, which had begun in 1851 and triggered a second global scramble in pursuit of the precious yellow mineral.

“The smaller discoveries made in the colony of New South Wales three months before,” he observed, “had already started emigrants towards Australia; they had been coming as a stream.” But with the discovery of Victoria’s fabulous gold reserves, which were literally Californian in scale, “they came as a flood”.

Between Sutter’s Mill in January 1848, and the Klondyke (in remote Northwestern Canada) in the late 1890s, the 19th century was regularly subject to such flooding. Across Australasia, Russia, North America, and Southern Africa, 19th century gold discoveries triggered great tidal waves of human, material, and financial movement. New goldfields were inundated by fresh arrivals from around the globe: miners and merchants, bankers and builders, engineers and entrepreneurs, farmers and fossickers, priests and prostitutes, saints and sinners.

A nugget believed to be the first piece of gold discovered in 1848 at Sutter’s Mill in California. Smithsonian National Museum of American History

As the force of the initial wave began to recede, many drifted back to more settled lives in the lands from which they hailed. Others found themselves marooned, and so put down roots in the golden states. Others still, having managed to ride the momentum of the gold wave further inland, toiled on new mineral fields, new farm and pastoral lands, and built settlements, towns and cities. Others again, little attracted to the idea of settling, caught the backwash out across the ocean – and simply kept rushing.

From 1851, for instance, as the golden tide swept towards NSW and Victoria, some 10,000 fortune seekers left North America and bobbed around in the wash to be deposited in Britain’s Antipodean colonies alongside fellow diggers from all over the world.

The discovery of the precious metal at Sutter’s Mill in January 1848 was a turning point in global history. The rush for gold redirected the technologies of communication and transportation and accelerated and expanded the reach of the American and British Empires.

Telegraph wires, steamships, and railroads followed in their wake; minor ports became major international metropolises for goods and migrants (such as Melbourne and San Francisco) and interior towns and camps became instant cities (think Johannesburg, Denver and Boise). This development was accompanied by accelerated mobility – of goods, people, credit – and anxieties over the erosion of middle class mores around respectability and domesticity.

Read more: All that glitters: why our obsession with putting gold on food is nothing new

But gold’s new global connections also brought new forms of destruction and exclusion. The human, economic, and cultural waves that swept through the gold regions could be profoundly destructive to Indigenous and other settled communities, and to the natural environment upon which their material, cultural, and social lives depended. Many of the world’s environments are gold rush landscapes, violently transformed by excavation, piles of tailings, and the reconfiguration of rivers.

The Earth, at the End of The Diggings. Courtesy, Ballaarat Mechanics’ Institute.

As early as 1849, Punch magazine depicted the spectacle of the earth being hollowed out by gold mining. In the “jaundice regions of California”, the great London journal satirised: “The crust of the earth is already nearly gone … those who wish to pick up the crumbs must proceed at once to California.” As a result, the world appeared to be tipping off its axis.

In the US and beyond, scholars, museum curators, and many family historians have shown us that despite the overwhelmingly male populations of the gold regions, we cannot understand their history as simply “pale and male”. Chinese miners alone constituted more than 25% of the world’s goldseekers, and they now jostle with white miners alongside women, Indigenous and other minority communities in our understanding of the rushes – just as they did on the diggings themselves.

Rushes in the present

The gold rushes are not mere historic footnotes – they continue to influence the world in which we live today. Short-term profits have yielded long-term loss. Gold rush pollution has been just as enduring as the gold rushes’ cultural legacy. Historic pollution has had long-range impacts that environmental agencies and businesses alike continue to grapple with.

Read more: The world protests as Amazon forests are opened to mining

At the abandoned Berkley pit mine in Butte, Montana, the water is so saturated with heavy metals that copper can be extracted directly from it. Illegal mining in the Amazon is adding to the pressures on delicate ecosystems and fragile communities struggling to adapt to climate change.

The phenomenon of rushing is hardly alien to the modern world either - shale gas fracking is an industry of rushes. In the US, the industry has transformed Williston, North Dakota, a city of high rents, ad hoc urban development, and an overwhelmingly young male population – quintessential features of the gold rush city.

In September last year, the Wall Street Journal reported that a new gold rush was under way in Texas: for sand, the vital ingredient in the compound of chemicals and water that is blasted underground to open energy-bearing rock. A rush of community action against fracking’s contamination of groundwater has followed.

The world of the gold rushes, then, is not a distant era of interest only to historians. For better or worse, the rushes are a foundation of many of the patterns of economic, industrial, and environmental change central to our modern-day world of movement.

Benjamin Mountford and Stephen Tuffnell’s forthcoming edited collection A Global History of Gold Rushes will be published by University of California Press in October 2018. A sample of their work can also be found in the forthcoming volume Pay Dirt! New Discoveries on the Victorian Goldfields (Ballarat Heritage Services, 2018).