If you were asked to name a weapon used in World War I, you’d probably think of gas attacks, or artillery, or tanks.

But another unusual weapon was battering people across the world, and caused suffering long after the bell tolled on the 11th November 1918. It wasn’t a new invention: it was hunger.

Dr. Mary Cox and Dr. Clare Morelon, early career researchers in the History Faculty, and Principal Investigator Professor Sir Hew Strachan, are leading a groundbreaking international research project that is exploring how one of our most basic requirements—food—shaped World War I and its aftermath.

The Hunger Draws the Map project is revealing how the Great War, including a British and French blockade that prevented ships carrying food and weapons from getting to Germany, Austria-Hungary, Bulgaria, and Turkey until 1919, caused malnutrition and starvation across Europe and the Ottoman Empire—for years after the war ended. 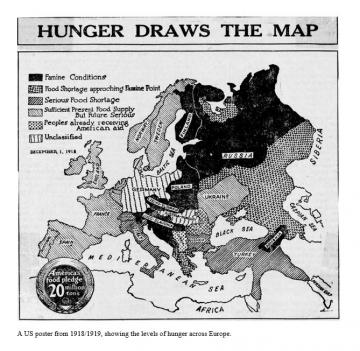 “There was so much suffering in the world after the war was over,” says Dr. Cox. “Yes, there’s the terrible stuff you hear about—injured soldiers, people who were maimed—but during and after the war, people were hungry.”

And debates have been raging for a hundred years about just how hungry people were. “We’re actually plugging into a debate that goes back a hundred years,” Dr. Cox says. “Some call it a myth; others say people were dying on the streets.”

By using innovative new methods and making thematic comparisons, Dr. Cox and the team, working with an international group of researchers, are working on a book that will try to trace just how hungry populations were, and what effect this had on the post-war world. “This is a group effort,” Dr. Cox says. “I’m very grateful to and respect my colleagues who are contributing to this project from around the world. Working so closely with Claire Morelon and Hew Strachan has been an honour.”

The project is trying to understand hunger in lots of different ways. This involves looking at how much food was available and measuring the growth curves and weights of people at the time. But it also means thinking about hunger in other ways.

“How did states understand food security? What were the political responses to hunger? Who did everyone blame?” Dr. Cox asks.

In Germany, farmers often got the blame. “People in the cities accused farmers of keeping their food for themselves, rather than giving it to people in towns and cities.”

And how did being hungry change the way people lived their lives? “The black market was huge, and people smuggled food when they could,” Dr. Cox explains. “But hunger also changed how people behaved. If you had  an occupation where you physically needed to work a lot--swing a hammer, wash laundry, walk miles to get to a factory—that burned calories. People limited their physical activity in order to survive.” 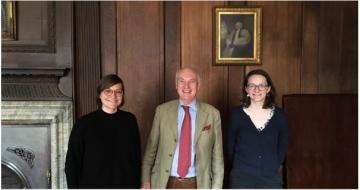 And, with so little food, people had to resort to survival strategies. “People tried to grow gardens, or share what they had with their loved ones. In Germany, women sacrificed themselves for their children.”

Not many people know about how hunger was used as a weapon in this way, but Dr. Cox says the impact was vast.

“This story really needs to be told and understood,” she says. “This war affected the rest of the twentieth century. Hunger is such a horrible, horrible thing to experience, people don’t forget very easily. People lost trust in their governments, sometimes their neighbours, and social divisions were often amplified.”

And, at root, this is a story about everyday people.

“Hunger is experienced on an individual level, so even though there were millions of people, we’re trying to put individual faces to their suffering,” Dr. Cox says.

Together, the Hunger Draws the Map team are working on a thematic book that explores all of these issues from a comparative, international perspective, from Finland to the Netherlands to Bohemia. By doing so, they encourage us to remember, as we celebrate the centenary of the end of the war in 2018, how hunger drew the post-war map.