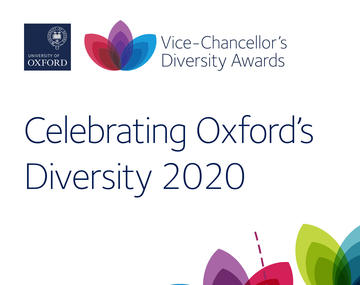 Three members of Oxford Humanities made the shortlist for the Vice-Chancellor’s Diversity Awards, which have been announced today.

The Awards recognise people and projects that promote equality and diversity at Oxford University and beyond. Professor Louise Richardson, Vice-Chancellor of the University, said: “Exceptional work is being undertaken at all levels of the University in this area and countless colleagues devote time and energy to initiatives which promote equality and diversity – often on top of their usual responsibilities. The awards recognise and celebrate these pioneering initiatives and the people behind them.”

Elizabeth Frood, Associate Professor of Egyptology in the Faculty of Oriental Studies, was shortlisted for the award of Champion or Role Model. The nomination said: “In 2015 Liz went into septic shock and as a result uses prosthetic legs, is hearing impaired and has almost no hand function. Her courage, determination and resourcefulness in returning to her academic work have been outstanding.

"In addition to carrying out teaching and research, including fieldwork in Egypt, in the face of physical challenges, Liz has been active in raising awareness and improving disability support across the University and building networks among disabled staff and students at Oxford. She has spoken at numerous events, on student radio and in the British and international media, and in doing so has encouraged students with disabilities, who have seen that it is possible for them too to pursue an academic career.”

Suzan Meryem Kalayci, British Academy International Newton Fellow in the Faculty of History and Junior Research Fellow, Pembroke College, was also shortlisted for this award. Her nomination said: “As an Early Career Researcher, Meryem has demonstrated leadership and an ability to influence change within the Humanities and across the University, playing an important role in establishing the Oxford Network for Armenian Genocide Research and co-founding the Silence Hub, an interdisciplinary collaboration that connects silence and mindfulness with academics and members of the public.

"She is committed to ensuring that her public and community engagement work actively seeks to include people whose voices are often ignored, enabling people from a range of backgrounds and identities – including those who identify as D/deaf or hearing impaired, those with mutisms, and Quakers and other religious and spiritual groups - to engage with the University’s research and practice.”

A project led by Michèle Mendelssohn, Professor of English and American Literature, was shortlisted for the Projects and Programmes award. Her project, ‘Making History: Christian Cole, Alain Locke and Oscar Wilde at Oxford’, was carried out in collaboration with Elizabeth Adams and Daryl Green. It is described as “an exhibition and events series celebrating Oxford University’s first Black African undergraduate, Christian Cole; the first African-American Rhodes scholar, and midwife to the Harlem Renaissance, Alain Locke; and the great Irish wit and dandy, Oscar Wilde”.