But not many people realise that scrawling on walls isn’t anything new. At least three thousand years ago, in the dusty heat of Ancient Egyptian temples, people did the very same thing.

Dr. Elizabeth Frood, Associate Professor of Egyptology, has been painstakingly uncovering examples of such graffiti at the four-thousand-year-old Temple of Karnak.

Nestled alongside official images of the gods are the names and drawings of ordinary people. Some are carved into sandstone, while others have been carefully inked and painted. 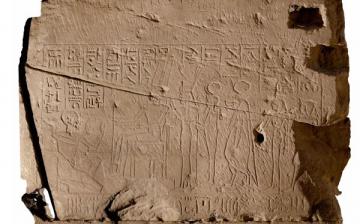 The inscription of baker’s name and image.

“People write their names and titles—sort of like “I was here”,” Dr. Frood explains. “A lot of the graffiti is by temple staff. In one stairwell, we have a baker’s name and image—I imagine him as someone who made delicious cakes for the gods.”

Unlike some of the more unsavoury graffiti you might stumble across nowadays, however, our ancient contemporaries appear to have been quite inspired by religion.

“People always ask me, “Ooh, is there obscenity?” And I have to admit, “No, they’re really pious!”” Dr. Frood says.

But this doesn’t mean that the graffiti were always accepted. In some cases, Dr. Frood has discovered that it had been plastered over or even erased, although sometimes, just like today, this was simply to make room for more graffiti.

“You look at it, and you know there’s something different about it, a bit jarring. You can imagine priests or officials walking through, seeing it, and thinking, “Weird!””.

Dr. Frood first noticed the graffiti during her own doctorate, when she was researching formal temple displays.

“I remember walking through the temple, looking at all the formal inscriptions. And then, suddenly, it was like looking through a kaleidoscope—something shifted, and all of this graffiti popped out of the wall!” 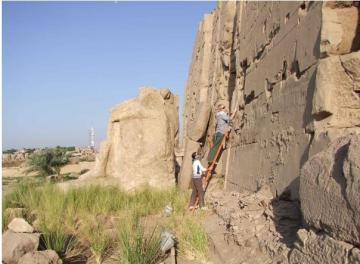 The graffiti had been there all along. “I’d been a student pottering around in this temple, and I’d not noticed, and then suddenly my lens changed—and it was everywhere!”

Dr. Frood carried on with her doctorate, but she didn’t forget the graffiti. When the chance to work on it finally popped up, in 2010, she grabbed it.

Researching graffiti is hard work. In collaboration with the Centre Franco-Égyptien d’Études de Temples de Karnak, Dr. Frood and her doctoral student, Chiara Salvador, have been meticulously photographing, copying, and analysing the inscriptions. They then try to date it by examining the style of handwriting and the surrounding archaeology.

But such thorough work means that Dr. Frood has the opportunity to connect with people who lived thousands of years ago.

“When you’re recording a graffito, and tracing someone’s name, you’re following the hand of someone that was writing on the temple wall in, say, 1100 BC. And on an emotional level, that’s very powerful.”

And documenting this graffiti gives us an unusual peek into daily life of an ancient society.

“The moment you shift your lens, the temple becomes this cluttered, busy, bustling, human space. It’s often hard for us to imagine what these environments would’ve felt like, but the graffiti lets us do that. And that’s what makes them so special.”