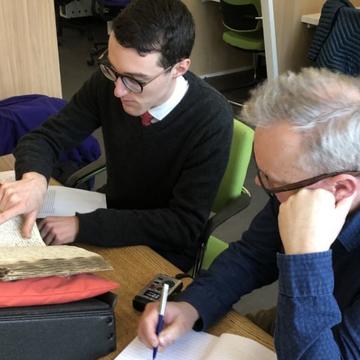 Eamonn O'Keeffe of the Faculty of History (left) explains his discovery

In a newly-discovered passage from a private diary, a Yorkshire farmer argues in 1810 that homosexuality is innate and should not be punished by death.

The passage was uncovered by Eamonn O’Keeffe, an AHRC-funded doctoral student in the History Faculty at the University of Oxford, while undertaking his PhD research in Wakefield Library. Although historians have written about other parts of the Tomlinson diary, this passage has not previously been brought to light.

Mr O’Keeffe said: 'In this diary we see a Yorkshire farmer arguing that homosexuality is innate and something that should not be punished by death. While Tomlinson’s writings reflect the opinions of only one man, his phrasing - ‘as I am informed it is’ - implies that his comments were informed by the views of others.

'This exciting discovery complicates and enriches our understanding of Georgian attitudes towards sexuality, suggesting that the revolutionary conception of same-sex attraction as a natural human tendency, discernible from adolescence, was mooted within the social circles of an ordinary Yorkshire farmer.'