Louisa Olufsen Layne loves literature. She also loves reggae. Growing up in Norway, she devoured Dostoyevsky and soaked up her Dad’s record collection. Now, at Oxford, Louisa is bringing her interests together.

Louisa is a fourth-year DPhil student studying English. Talking about her love for literary theory and her ear for Jamaican music, she explains how a desire to combine the two brought her to Oxford. “I thought there was something compelling about bringing those two worlds together,” she explains.

The poet Linton Kwesi Johnson turned out to be the key. Johnson is well-known for developing dub poetry, a genre heavily influenced by reggae music. Primarily active in the 1970s and 1980s, Johnson developed a style of poetry that crosses the boundary between poetry and performance. He also toured with punk performer John Cooper Clarke.

Louisa was fascinated by Johnson, and after studying his poetry for her master’s degree in Oslo, Louisa knew she wasn’t finished. “I liked the UK, I liked the university culture, and I met some people who had gone to Oxford,” Louisa remembers. “They said I should consider applying here. So I did!”

Louisa has now spent the past four years working on Linton Kwesi Johnson’s poetry and making the most of what Oxford has to offer. 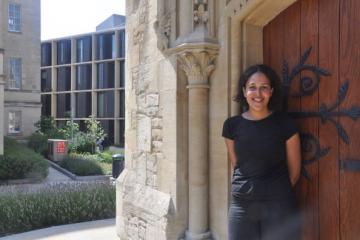 Coming to Oxford as an international student and a graduate was a big change for Louisa. “When you change institutions, you start to see things quite differently,” she says. “Oxford gave me much more of a historical interest.”

On the personal side, adjusting was a little more challenging. “When I first came here, I didn’t know anyone, so I was quite shy,” she admits. “The first seminars I went to, I felt quite intimidated. But then you get used to the environment. I started to feel more confident in this new place, and all of a sudden, people go from being strangers to becoming your friends.”

Attending the seminar brought Louisa to a community of people working on topics ranging from black British writing to Caribbean and World literature. Inspired by the conversations taking place, Louisa decided to get involved in organisation herself. Last year, she began co-convening the Race and Resistance network at TORCH.

This proved to be an exciting move. In February, Louisa organised an event on hiphop for the network with her colleague Dr. Imaobong Umoren.

“Marcyliena Morgan, the director of the Hiphop Archive and Research Institute at Harvard, came to talk about the study of hiphop,” she says. “For me, that was one of the highlights.”

During the event, Morgan talked about how British and American scholars can research and exchange knowledge not only on hiphop, but also on British rap and grime, and other forms of contemporary culture.

“It added an interesting perspective,” Louisa says. “Marcyliena Morgan was talking about how they’ve had hip-hop fellows, and have an archive of the best hip-hop albums. Oxford is very good at historical topics and disciplines, and should continue being so, but we also have room for contemporary culture and criticism.”

So while bringing together her love of literature and music, Louisa has made some pit stops along the way—delving into hiphop, African-American literature, and punk lyrics. It’s these opportunities to explore such diverse areas that Louisa has relished while at Oxford.

“There’s so many things going on, so if you get involved, like I did, it opens up possibilities,” she says.