Chris Smart had only been in Oxford for a week when he joined one of Oxford’s most innovative student-led campaigns.

At the fresher’s fair, packed into a hall full of the University’s societies and sports clubs, Chris met DPhil student Thais Roque and a group of students who all had a clear objective: to help refugees study in Oxford.

Two years later, Chris is now one of the key figures running the Oxford Students Refugee Campaign (OxSRC), and the only undergraduate committee member. The campaign, which is entirely student-run, helps refugee students from abroad, and asylum-seeking students in the UK, continue their studies in Oxford.

Chris and his colleagues began by targeting the student body. During his first year, alongside the obligatory essay crises and weekly tutorials, Chris went from college to college pitching the campaign. The reception was overwhelmingly positive, and by the end of the year around half of students across the University had committed to annual donations of £12. 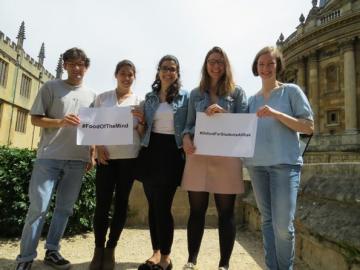 Chris (left) and other members of the Oxford Students Refugee Campaign, launching their emergency appeal.

With these donations, and other fundraisers, the campaign has now raised an impressive £70,000, and is hoping to see its first funded students arrive in Oxford in October.

Meanwhile, Chris has just started the third year of his History degree at Mansfield College, and he’s managed to pack a lot into his two years here.

Originally from Cornwall, where he spends his free time in the sea, he’s also a keen photographer, and has acted in student theatre. But it’s OxSRC that has had the biggest impact on his Oxford experience.

“I learnt a huge amount very quickly,” he says. “And not just essential skills, like teamwork and organisation.

“I’ve also gained a far better understanding of what life is like for at risk students. I’m in contact with applicants via e-mail, and sometimes hearing what they’re going through is hard-hitting.”

After finishing his first year exams, Chris headed to Calais to volunteer at the refugee camp.

While there, Chris worked with the charity L’auberge des migrants, recycling waste wood for cooking fuel and distributing it within the camp alongside food deliveries. It was a steep learning curve, but one that OxSRC had prepared him well for.

Now back in Oxford, Chris is focused on the campaign again. He’s currently working on an emergency fundraising appeal, which is raising urgent funds online and was recently featured in Vice magazine.

In the long-term, the campaign hopes to establish a permanent, sustainable scholarship fund that will be able to anticipate the needs of future refugee students.

“It’s so important to reach out to refugee groups in need of education,” he says.

“The demonstration of this in history is huge— the scientists and mathematicians and Abstract Expressionist artists who fled authoritarian regimes in the USSR and Europe had a massively important impact on the societies they settled in. We should avoid the negative stigma that now exists around migrants and refugees.”

And being involved in the campaign has helped Chris too. “I think the impact of my work with OxSRC will continue to positively affect my entire self for a long time to come,” he says.

To learn more about the campaign’s goals and achievements, visit their website here. You can also contribute to their emergency campaign, and watch their campaign video, here.