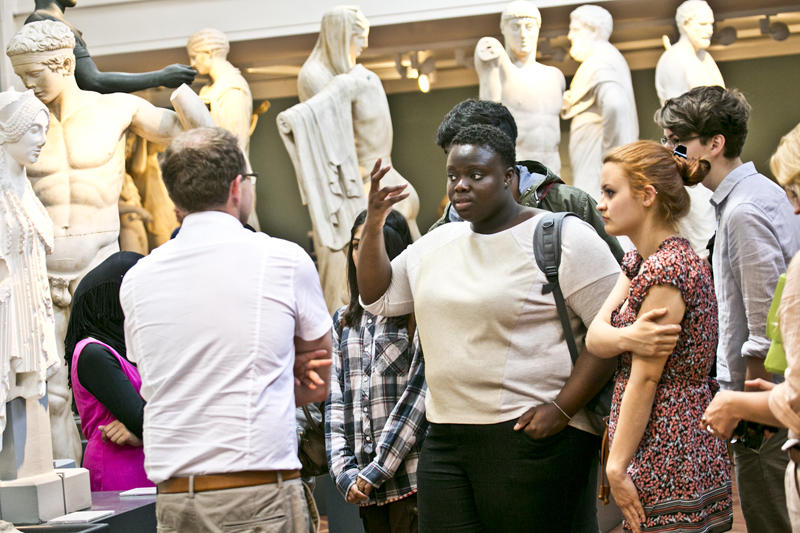 The diverse voices of the Oxford Classics community will be celebrated in a podcast series and film, as part of a new project.

Representative Classics seeks to create thought-provoking conversations, engage new audiences, and widen access to the myriad areas of study which come under the umbrella of Classics.

It is created and coordinated by the Faculty of Classics, in partnership with the Archive of Performances of Greek and Roman Drama (APGRD), the Faculty of Linguistics, Philology and Phonetics and the Oxford Centre for Byzantine Research.

Alongside the podcasts and film, the project will include an exhibition in the spring of 2022 which will be permanently displayed in the Classics Faculty’s Ioannou Centre (in Oxford) as a visual, evolving and long-lasting form of representation.

“Many prospective students feel that they may not ‘fit in’ at Oxford because they cannot see or hear people like themselves represented here,” says Dr Arlene Holmes-Henderson, one of the project’s leaders. “But Oxford Classicists can and do come from a wide cross-section of society. This project aims to bring together current students, staff and alumni to showcase the diversity of both Classics and Classicists.”

The project is looking to highlight Oxford Classicists (past and present) who identify as belonging to one or more of the following groups: from a working-class background; from a non-traditional educational background; who are non-white; who have disabilities; who are or have been mature students; or who have entered academia after alternative careers.

Many of these groups may intersect: reducing any individual to a set of categories can, of course, never capture the complexity of a life story but talking to people from a range of backgrounds will hopefully shine a light on the diversity of people with interests in the ancient world.

The first iteration of the project is called ‘Regional Classics’ and aims to capture the voices and experiences of those from areas which have traditionally been underrepresented within the Faculty: namely, the North and South-West of England, the Midlands, Ireland, Scotland, and Wales.

The project has been funded by the Craven Committee and the Humanities Division Culture Change Fund.

The team is particularly keen to talk to alumni, Faculty Members, postgraduate students and undergraduates who identify strongly with any of these representative categories and who would be keen to share their perspectives via our podcast and/or film series. Anyone interested in getting involved in the Project can contact outreach@classics.ox.ac.uk and katrina.kelly@classics.ox.ac.uk