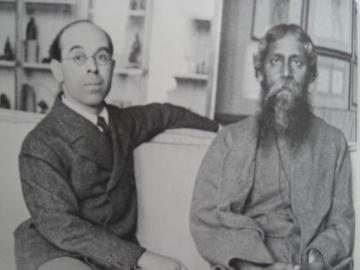 ‘Our Migration Story’, a website resource created by the Runnymede Trust has won The Royal Historical Society's Public History Prize 2018 for Best Online Resource. Professor Elleke Boehmer of the English Faculty was one of those who contributed to the resource, both from her work on the AHRC-funded research project ‘South Asians Making Britain’, and from her 2015 monograph, Indian Arrivals. In particular, she contributed a case study account of WB Yeats, Rabindranath Tagore and William Rothenstein's 1910-12 collaborations.

Dr Graham Riach, a Lecturer in World Literature in the English Faculty, contributed the videos for the website. Each of the four videos covers one major period of migration, from AD43 to the present. They feature interviews with Professor Jo Story, Professor Robert Tombs, Professor David Feldman, and Professor Hakim Adi, as well as footage of historical sources.

Other winners at the prize-giving ceremony last week Friday included David Olusoga, for his TV series 'Black and British: A Forgotten History'. You can read more about the Royal Historical Society's Public History Prize and the other 2018 winners here. Since its launch in September 2016, Our Migration Story has registered over 38,554 users and approximately 115,714 page views.