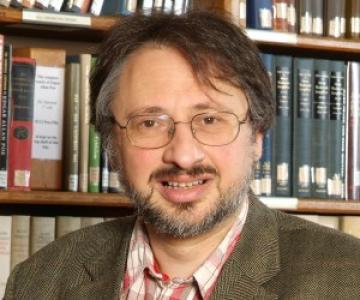 The Faculty of Classics congratulates Professor Jaś Elsner on his election as a Fellow of the British Academy.

Professor Elsner has been a Senior Research Fellow at Corpus Christi College and a member of the faculty since 1999.  His main interest is the art of the Roman empire to include late antiquity and the early middle ages including Byzantium as well as the pre-Christian Classical world.  He is currently the Principle Investigator on the Empires of Faith Project between the British Museum and Wolfson College, Oxford.  The Project explores the visual cultures of the world religions in the Mediterranean and Asia between 200 and 800 AD; a major exhibition arising from the project will run at the Ashmolean Museum, Oxford between 19 October 2017 and 18 February 2018.

The British Academy is a fellowship of around 1,400 leading national and international academics elected for their distinction in the humanities and social sciences. Each year, the British Academy elects to its Fellowship up to 52 outstanding UK-based scholars who have achieved academic distinction as reflected in scholarly research activity and publication.