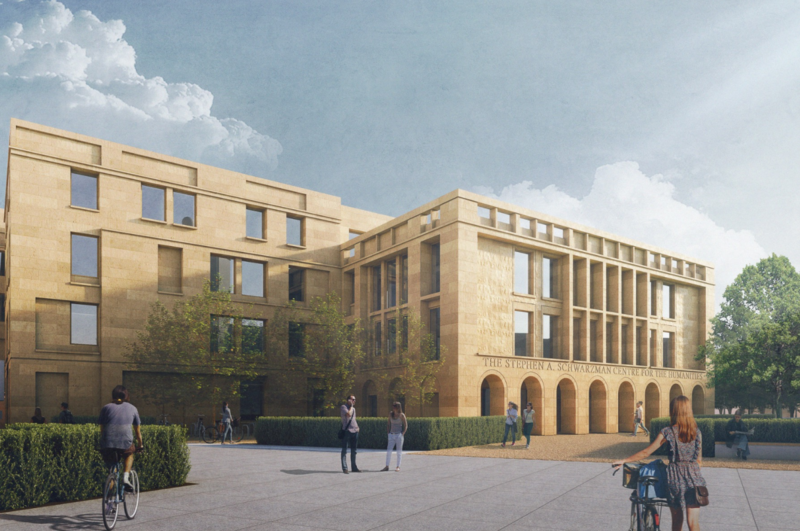 The second public consultation for Oxford University’s Stephen A. Schwarzman Centre for the Humanities has launched today (17th June).

We are excited to share images of the proposed design by Hopkins Architects for the first time, including the entrance above. Our detailed plans are being presented to the community in Oxford and feedback is sought by 8th July. These responses will inform the planning application for the building which will be submitted to Oxford City Council later in late summer or early autumn.

The building would be erected on the Radcliffe Observatory Quarter between Walton Street and Woodstock Road, and exhibition boards for the consultation can now be viewed online at www.ox.ac.uk/humanitiesconsultation.

The Centre has been made possible by a £150 million gift to the University from Stephen A. Schwarzman, CEO and Co-founder of Blackstone, one of the world's leading investment firms. It will boost teaching and research in the humanities at Oxford and provide them with a new home which brings together seven faculties, a new Institute for Ethics in AI, the Oxford Internet Institute, and a new library.

Professor Karen O’Brien, Head of Humanities at Oxford University, said: “Our proposed design reflects our ambition to create a welcoming building that people will be intrigued to visit. This will be an open building which we hope will soon become a popular destination for residents of our city and county.

“We look forward to inviting everyone in to attend our events and performances, or simply meet a friend in the café. We welcome all feedback on our proposal and we will work closely with the City Council as we develop our vision ahead of the planning submission later this year."

Professor William Whyte, Professor of Architectural History at Oxford University, said: “This is a building of enormous complexity and huge ambition. Designed by a world-leading architectural practice, it will also be beautiful: a new home for the Humanities, a new public space for the people of Oxford, and an inspirational addition to the city’s architecture.”

Philip Pullman is a renowned author who set his His Dark Materials trilogy in Oxford. In the recent televised depiction on the BBC, the fictional Jordan College was revealed to be on the future site of the Schwarzman Centre in Lyra’s world. He said: “The Schwarzman Centre for the Humanities will be an exciting and distinguished addition to the architecture of this beautiful city, and what it embodies about the central place of humanities in the world of learning needs demonstrating now more than ever. I look forward to seeing it flourish.”

The Centre will also bring many benefits to the city of Oxford, including:

The proposed design of the building reflects the diverse characters and identities of the varied academic and public engagement activities which will take place in the Centre. It aims to be a high-quality contribution to Oxford’s built environment while respectfully responding to its surroundings and the city’s architectural heritage.

Environmental sustainability will be a priority throughout the design and construction of the building, and the Centre will make a major contribution to the University’s aim to halve its carbon emissions by 2030 and towards achieving its ambition of net zero carbon emissions and net biodiversity gain by 2035. Features will include: