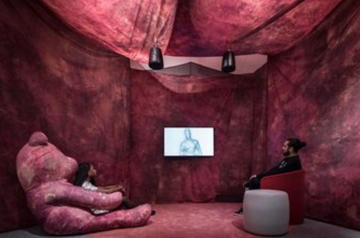 Two Oxford artists have won £10,000 prizes as part of the 2020 Turner competition, one of the art world’s most high-profile awards.

The Ruskin School of Art’s doctoral student Shawanda Corbett and Associate Professor Oreet Ashery have each been awarded Turner Bursaries and are two of only 10 artists honoured in this year’s awards.

Oreet Ashery’s projects include moving image, performance, photography, workshops, writing and assemblages. It explores issues of gender, autoethnography, fiction, biopolitics and community. She was selected for her contribution to Misbehaving Bodies: Jo Spence and Oreet Ashery at the Wellcome Collection, which explored lived experiences of care and chronic illness.

The jury was particularly moved by her new film Dying Under Your Eyes and the innovative web series Revisiting Genesis. This work follows two nurses who assist people actively preparing for death to create biographical slideshows serving as their posthumous digital legacy.

Shawanda Corbett, a doctoral student at the Ruskin, combines ceramics, paintings and performance to question the idea of the ‘complete’ body. Each of her hand-thrown ceramic vessels is inspired by real people and they are frequently incorporated into politically-charged performances in which Corbett’s own body leaves traces on the pottery vessels and surfaces.

The jury commended the power of her performance Blackbird Mississippi at the Serpentine Gallery, in which the artist drew parallels between a slave’s voyages on the underground-railroad and the artist’s own journey towards rehabilitation. The jury also noted the current exhibition of jazz-inspired paintings and hand-thrown ceramics Neighbourhood Garden at Corvi-Mora, London.

Dr Anthony Gardner, head of the Ruskin School, said, ‘I am delighted that two members of the Ruskin community, tutor Oreet Ashery and DPhil researcher Shawanda Corbett, have been awarded Turner Bursaries - this year's equivalent to the Turner Prize, the most prestigious art award in the UK.

'This is extraordinary news and their success follows on from previous Ruskin successes at the Turner Prize, with tutor Lynette Yiadom-Boakye nominated in 2013, alumna and then-tutor Elizabeth Price winning the Prize in 2012, and alumna Helen Marten winning in 2016.'

Because of COVID-19, it was not possible to have an exhibition this year, but Tate Britain announced the awards last week. The gallery’s director Alex Farquharson, leader of the Turner jury, said the list reflects ‘the exceptional talent found in contemporary British art’.

He said, ‘From ceramics to film, performance to photography, they represent the many exciting and interdisciplinary ways that artists work today. These bursaries represent a vote of confidence in that work and offer some much-deserved support in challenging times.’

The 2020 jury was: Richard Birkett, Curator at Large at the Institute of Contemporary Arts; Sarah Munro, Director of BALTIC Centre for Contemporary Art; Duro Olowu, designer and curator; and Fatoş Üstek, Director of Liverpool Biennial. The Turner Prize will return to its exhibition format in 2021.

More information on these artists and their work can be found here.