When two music undergraduates answered an advertisement looking for violin players, they thought it would be a great opportunity to perform outside of their music degrees.

But they had little idea just how big an opportunity was in store.

Rahat Fateh Ali Khan is a popular Pakistani singer. He primarily performs Qawwali, the devotional music of Muslim Sufis, and has also worked in Bollywood. His uncle, world-famous Ustad Nusrat Fateh Ali Khan, was known as the “King of Qawwali”, and tutored his nephew from the age of three.

On YouTube, Khan’s most-watched music video has over 200 million views. He has a truly global reach—and in May, he was coming to Oxford, and Alex and Jennifer would be playing a part.

Performing wasn’t new to either of them. Both Alex and Jennifer have been playing music from a young age, individually and in bands and orchestras. 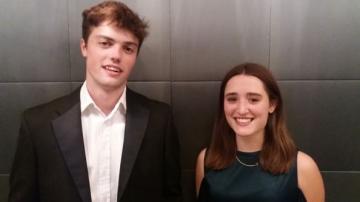 “I started the violin when I was six, and the saxophone when I was twelve. I did a lot of playing at school. I couldn’t imagine doing anything else, so I applied to do Music here,” Jennifer explains.

Alex had a similar experience. “I started piano when I was eight, and violin a couple of years later. I started taking it more seriously when I got to sixth form, but I decided to apply to Oxford quite late. But I’m really glad I did.”

But performing with Khan pushed them both to develop their skills to a new level.

“It was a very different skill set from an orchestra. The whole setting was improvised,” Alex says.

Jennifer adds, “None of the solos were rehearsed, so you were always interacting with everyone, trying to catch eye contact—you had to be constantly very aware!”

The two rehearsed for a month with The Fusion Project, an ensemble that aims to bring Indian Classical music to a wider audience. They were two of twelve musicians, their violins accompanied by a combination of western and classical instruments, including tabla drums and a bansuri.

Finally the group arrived at the Sheldonian for a performance. “Rehearsals had been quite low-key, but on the day I suddenly realised it was quite a big deal—I was nervous!” Alex says.

The 350-year-old ceremonial hall was decorated with cushions, rugs, and throws, and the musicians were sat on a raised stage surrounded by an expectant audience.

“It was more packed than I’d ever seen the Sheldonian,” Jennifer says.

Luckily, neither were struck by stage fright. The concert, which consisted of original compositions and qawwalis, flew by, and both relished the experience—despite being kept on their toes.

“It was a fantastic concert,” Alex says. “The juxtaposition of the music with such an old, traditional ceremonial hall was strange, but great.”

Alex and Jennifer hope that the concert will lead to greater engagement with Indian and Pakistani classical music in Oxford. Having already had the opportunity to explore different aspects of music through their degrees—like sound art, Brazilian music, and the psychology of performance—they would welcome more opportunities to learn about different genres.

And taking part has also helped them think about what they might do after Oxford.

“It would be great to organise big events like this,” Alex says. Jennifer agrees. “I think it’s important to get young people interested in music, through outreach work and performances.”

Curious? You can listen to some of Rahat Fateh Ali Khan’s music for yourself here.