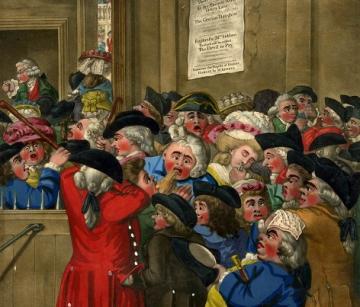 The thesis topic will explore evidence beyond print of the ways in which theatrical culture was made and consumed in eighteenth-century Britain.  The study of theatre history and performance is often grounded in printed versions of play texts. Yet theatre itself is primarily a visual and aural medium. Throughout its history, the study of performance has attempted to balance the evidence of print alongside what cannot be captured by typeface. In moving towards and away from print, what is gained and what is lost? This project will frame the tensions between different forms of mediation in eighteenth-century theatrical culture: performance, theatrical ephemera and playtext. In the eighteenth-century print editions were often a way of restoring censored text (by the licenser or theatre managers) for authors or for producing texts ‘for reading’ very different from those in performance. Evidence about forms of ‘publication’ other than the printed play text allows us to tell a deeper and longer story about the ways that theatre produces audiences and political community. These competing forms of representation speak to different audiences and problematize any sense of the dominance of print over performance publication. We know that the ‘whole show’ in eighteenth-century theatre consisted of dance and music interludes while dance annotation and music transcription remain radically unstable forms in print. Reconstructing the role and presence of these elements and the way they interact with spoken word performances in a night’s theatrical entertainment would be one important element of the research project.

The doctoral student will, with the aid of the supervisory team, identify a number of case studies of theatre performances to track through the ephemera at the Brady special collection held at Christ Church Library to reconstruct a fuller and richer history of public consumption of theatrical experience than the study of individual playtexts or plays can afford.

Christ Church Library holds an extraordinarily valuable and huge collection of theatrical ephemera donated by Francis Bridgford Brady in 1977. Containing tens of thousands of items as yet uncatalogued, ranging in date from the 17th to 20th centuries, the collection spans a range of theatrical and entertainment subjects and is an invaluable primary resource. It includes c. 15,000 theatrical portraits of authors, actors and actresses (both in and out of roles), characters, dramatists, and depictions of theatrical productions, along with the music and other related materials.  The only comparable collections worldwide are at the V&A, the British Museum, the University of Pennsylvania and the New York Public Library. The kinds of reproduction available in these ephemeral sources offer us a snapshot of what performance might have meant in its immediate historical moment, and through its collection, what it came to mean in the twentieth century.

The candidate will be co-supervised by Professor Abigail Williams and Professor Ros Ballaster, both of whom work on eighteenth-century culture and the ‘performative’ aspects of print and reading.

One skills-based outcome of the doctoral research will be that the researcher will be trained by and work with  Dr Cristina Neagu (Keeper of Special Collections, Christ Church) to produce a catalogue of Brady materials that date from 1700-1800 on which to draw for the thesis, as well as future scholarship in this archive. The candidate would receive training in cataloguing and archiving. Working on the catalogue will serve to help identify resources on which to draw for the thesis, and address research questions as to what constitutes evidence of performance beyond print, the traces and longevity of performance reception and afterlife.  The project may also involve considering ways in which the collection might be curated for public-facing display, and some skills training in the presentation of scholarly or archival materials for a general audience.