Abstract: Is the essence of the divine representable? Apparently, sharp border lines separate aniconic from iconic representations of gods; and nothing can be more opposed than iconography and iconoclasm. Yet, iconoclasm can be, and indeed was, conceived as an act of cult; its practices imply not only the power of images, but specific strategies of attention in the eye of beholders. Aniconism only makes sense within a wider context where iconic and/or narrative representations of divine entities are the norm. Religious iconographies focusing on death and rebirth allude not only to the story or myth they tell, but to the cultural practices of recollecting and indeed revitalising tradition in devotional activity such as ritual, prayer, and belief. The very status of ruins, as defined in late antiquity and the Middle Ages, can be described as a cultural formation that acts as a bridge between iconic and aniconic, meaning and destruction, iconoclasm and rebirth, “classical” and “renaissance”.

About the speaker: Professor Salvatore Settis is an archaeologist and art historian who has directed the Getty Research Institute of Los Angeles and the Scuola Normale Superiore of Pisa. He is chairman of the Louvre Museum's Scientific Council.  He is the author of several books on art history as well as a regular contributor to major Italian newspapers and magazines.

This event will take the form of a symposium as follows:

A podcast of this lecture is available here and on iTunes 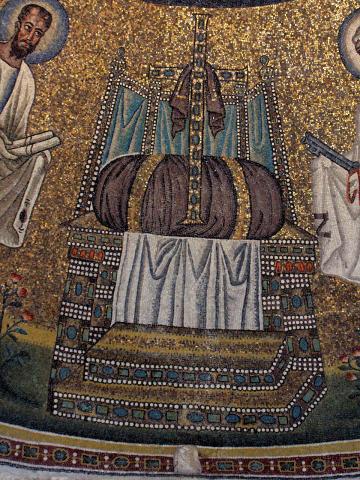 Throne with a jeweled crucifix resting on a purple cushion; Baptistry of the Arians, Ravenna, Italy

By Georges Jansoone (Own work)