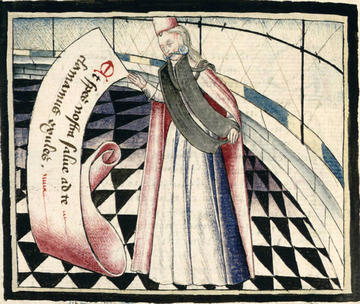 How did medieval readers hear the manuscript page? What technologies of reproduction were deployed to represent sound across genres and languages? Addressing the era of the Hundred Years’ War (roughly 1330-1450), a time of rich interchange between English and French literatures, this project will work across languages to consider how texts staged sound and how texts themselves were sounded through their publication, construed as an acoustic history. In the second half of the fourteenth century, the word ‘publish’ emerges in Middle English, sometimes in relation to written texts, but more often with an oral and aural meaning. This project is underpinned by a consideration of the varying meanings of ‘publishen,’ ‘publiier’ and ‘publish’ – what does publication imply before print?

The mid-fourteenth to mid-fifteenth centuries witnessed particularly dynamic interchange between French and English: Hainault poets wrote at the English court of Edward III and Philippa of Hainault; Chaucer made a decisive formal change to English poetry by adapting the dit amoureux into English verse; French poets such as Christine de Pizan and Charles d’Orleans had long connections with English courts and households. Multiple new forms emerged, and audiences now heard the same forms in syllabic French verse and in accentual-syllabic English poetry. In manuscripts, poets and scribes found innovative ways to represent songs without music, to mark pauses and silences, and to put non-verbal sounds into word and image. Understanding late-medieval texts’ publication requires hearing the page and valorising sound’s role in its multi-sensory communication.

Issues relating to sound, form, the contingency of form, and multilingualism will underpin the successful applicant’s project; they might address, for instance:

There could be fruitful intersections with the Oxford Song Network, the TORCH Oxford Medieval Studies Programme, and the Music and Late Medieval European Court Cultures Project. The successful applicant would benefit from access to Oxford’s exceptional collections of medieval manuscripts.