Mass communication before printing: coin circulation in the Roman world 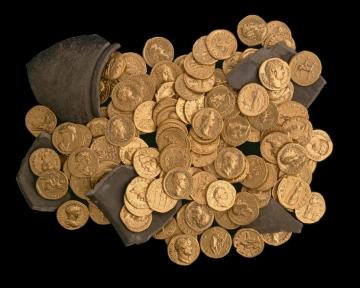 Coin striking was in many ways a precursor to printing. Coin striking and printing employed similar technologies, with engraved punches used to mass-produce words and images for geographically and socially diverse audiences. Studying the dissemination of ‘imperial messages’ through coin circulation in the Roman world allows one to investigate mass communication in a world before print. This is of particular interest as it has been argued that the thought-world was different—that imperial messages (e.g. of the conquest of Britain by Claudius or of the Nobilitas of the emperor Commodus) were disseminated as a form of monumentalization rather than as political propaganda.

The aim of this DPhil studentship is to see if inscriptions and images on coins were adapted to different levels of value (on gold, silver, and bronze coins), and so to the wealth or status of users. The student will also investigate variations in messaging geographically across the Roman Empire, for example between peripheral military provinces, like the Germanies, and peaceful core areas, like Italy. It used to be argued that there was no targeting. A few recent studies have detected some targeting by value or by geography in particular contexts. But both the extent and chronological development of targeting warrant larger investigation. There is scope for the student to trace developments in the content of messaging, to investigate the speed of transmission and the duration of messages in circulation, to compare the imperial themes on coinage with those in other media, such as monumental inscriptions, and to develop other approaches of their own.

Coins circulated in billions and could be produced very rapidly; in one researched context the mint of Rome produced around 20 million coins in 90 days. The student will have access to data from the Coin Hoards of the Roman Empire Project (CHRE), a joint initiative between the Ashmolean Museum and the Oxford Roman Economy Project (Classics). This already has records of nearly 12,000 surviving hoards from the whole Roman Empire containing over 3.5 million coins; it will allow the student to adopt for the first time a big data approach to this mass communication before printing.

The student will draw on the resources of the CHRE project. They will also enter further data to ensure that they have an adequate basis for their comparisons across values and regions, and so themselves make a contribution to the wider project. They will have access to, and benefit from, the project’s extensive international collaborations; these involve over forty international institutions, as well as fourteen other graduate students in eight countries.

The focus of the doctorate will be on communication before print, but the student will also be involved with, and learn from, publication after print: this will be through a digital platform designed to facilitate innovative collaborative working via the web and to be compatible with the standards for Linked Open Data in the subject—more advanced than for any other area of archaeology.