The places of and for ancient graffiti

Spatial analysis of inscriptional practices in an Egyptian temple 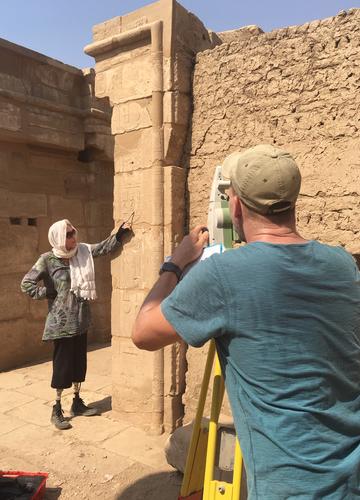 This DPhil topic is a spatial and social-contextual analysis of ancient Egyptian graffiti in the temple complex of the god Amun at Karnak (Luxor governorate). The graduate will have specialized training in 3D-GIS, digital archaeology and/or related tools, ideally with some background in Egyptian archaeology and/or texts. The thesis will be a sub-project of the Karnak Graffiti Project (KGP), ongoing since 2011, and will involve the digital recording of graffiti and the architecture of several buildings on which they are inscribed. Ultimately the thesis will be an assessment of the relationship between qualitative (mostly biographical) sources on the use and appropriation of temple space from the New Kingdom (beginning ca. 1550 BCE) to the Greco-Roman period, and the quantitative data and analyses produced. An archaeologist with relevant digital archaeology specialisms in the School of Archaeology will have an advisory role.

Graffiti is often understood to be, at best, illicit and countercultural, at worst, vandalism. It is a technology of self and group expression and publication that is territorial and politicised. The corpus of many hundreds of graffiti in this temple initially appears very different: they comprise carved, inked and/or painted names of temple staff, and pictures of the deities they worshipped, as seemingly authorised acts of pious connection and display. But they appropriate space and are often competitive, sometimes concerned with political advancement or elimination. They would never be mistaken for traditional self-presentation and can be covered over or erased at any time after inscription. Thus graffiti-writing sits within traditional forms of monumental discourse and publication, but also seems to subvert them.

KGP has so far analysed these practices in three areas: a chapel to the god Ptah in the north, a pylon gateway, and a courtyard/routeway in the south. We use conventional epigraphic methods as well as range of photographic recording techniques (RTI, photogrammetry). These comprise well recorded case-studies to now test against different areas deploying different techniques. Spatial visualization and analysis based on 3D-GIS and/or related tools is a natural follow-on subproject for KGP. By using such platforms we hope to develop a quantitative approach to phenomenological aspects of graffiti, related to access, lighting, temporality, and visibility. For example ‘view sheds’ can be created for each graffito within constantly transforming temple environments. Spatial data can be used for both the visualisation and presentation of graffiti within temples over time (i.e. by creating ‘storymaps’ of inscriptions that link up with biographies), and analytically, in particular as part of a dialogue with qualitative data on changing priestly and administrative use of, and authority within, temple space.