From pre-print to post-print: transformations in (the study of) epigraphic culture 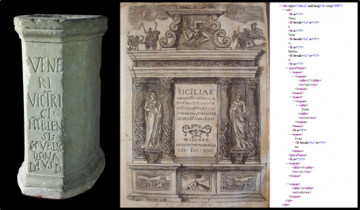 Epigraphy is the study of texts inscribed on durable materials. The culture of engraving texts was particularly strong in the ancient Mediterranean, producing over 1 million texts in Greek, Latin, and other languages. Inscriptions were an early focus of antiquarian scholars from the sixteenth century onwards. The development of print enabled the collection and circulation of such texts in corpora. However, the nature of print made this a fundamentally textual science. Notwithstanding an increased focus on material culture in the twentieth century, the development of digital tools initially reinforced this textual focus, albeit with obvious transformations, through the proliferation of text databases towards the end of the century. Ever richer techniques in Digital Humanities are now transforming the digital recording and study of epigraphic documents, exploiting e.g. TEI, (3D) imagery, GIS, annotation tools, and the potential of linked open data. Several examples of such corpora are in development at Oxford in the Faculty of Classics and the Centre for the Study of Ancient Documents, supported by the University’s extensive Digital Humanities community.

This new generation of digital epigraphic corpora creates new opportunities for research and new challenges in dissemination. Epigraphic documents are material objects, deliberately created and repeatedly witnessed, and represent a conscious choice to monumentalise a text and/or the use of writing in both public and private locations for a wide range of motives. There are many variables involved, including material, form, style, location, language and content, and recent scholarship is exploring these different aspects of epigraphic culture with growing sophistication. Digital corpora offer new ways not only of recording this information, but also of analysing and revisualising it. It becomes possible to study at greater levels of resolution over larger areas and across traditional and arbitrarily limiting boundaries (linguistic, cultural or chronological).

Simultaneously, digital approaches offer challenges, as modes of publication change, and the possibilities multiply. Existing databases are frequently treated as tools but not as reliable research outputs, and digital corpora are not universally accepted as primary editions by the academy. Vice versa, this offers enormous potential for public engagement, but the very act of creating diverse levels of public-facing digital outputs, often through collaborative editing including crowd-sourcing, further complicates the act of ‘publication’.

Against this backdrop, this project will exploit the I.Sicily corpus (http://sicily.classics.ox.ac.uk) to develop a post-print study and publication of the pre-print epigraphic culture of the island of Sicily. I.Sicily is a digital (EpiDoc) corpus under continuous development, based in the Faculty of Classics, with a track record of combining digital innovation with collaborative research and local dissemination projects (see https://isicily.wordpress.com/); additionally, the PI is editing in parallel the new edition of the Sicily volume of the definitive paper corpus of the Berlin Academy, Inscriptiones Graecae XIV.12 . Sicily offers unique opportunities for analysis of a regional epigraphic culture over more than a thousand years - the island is a richly multilingual and multicultural region at the heart of the ancient Mediterranean; I.Sicily offers a rich digital dataset with possibilities for further development – the ideal basis for such an innovative approach. The project will offer extensive opportunities to engage with the Leverhulme Doctoral Centre ‘Publication beyond print’, with reference both to the ancient pre-print publication world and to the challenges and possibilities of the post-print world of the digital humanities.

The project is supervised by Professor Jonathan Prag.