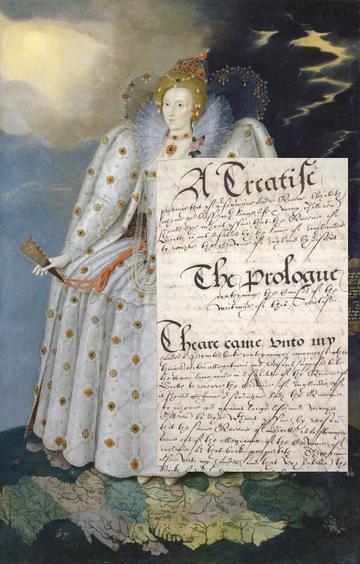 Queen Elizabeth I ('The Ditchley portrait') by Marcus Gheeraerts the Younger, NPG 2561

'Re-reading Plowden's Political Theology' is a doctoral opportunity for any student interested in doing cutting-edge, original, interdisciplinary research at the University of Oxford on the circulation of legal manuscripts, the formation of political ideas and the shaping of English literature (including Shakespeare).

Central to this doctoral programme is the study of an immensely important and influential treatise on the Scottish succession to the English throne, written at the Inns of Court in 1566-7 by the Elizabethan common lawyer and crypto-Catholic, Edmund Plowden. Although the political impact and literary influence of this treatise has been much discussed (most notably for its exposition of the doctrine of ‘the King's Two Bodies'), the treatise has never been edited and published. The successful applicant to this programme would, under the supervision of Professors Hutson and Kewes in English, and Professor Garnett in History, produce a first printed and digital scholarly edition of the ‘Treatise’, as well as a study of its argument and an assessment of its role in the Elizabethan debate about royal succession and its reconfiguration of the medieval notion of the ‘King’s Two Bodies’ (Kantorowicz 1957).

Though it will offer the chance of a career-making publication, 'Re-reading Plowden's Political Theology' is much more than an editing project. It will give the successful applicant a chance to study the manuscript circulation of a work which was so widely disseminated that its arguments decisively affected the Stuart succession and were adapted by Shakespeare and other imaginative writers. The project will therefore be a case study in the way in which manuscript circulation remained central in the law and political debate – as well as literary culture – even in the new age of print. Plowden was an innovative common lawyer, who started a new genre of legal reporting. Yet like all common lawyers well into the seventeenth century, he continued to publish much of his work, including the ‘Treatise’, in widely circulating, influential manuscripts. Unusually, Plowden blended arguments from English common law and the learned ius commune; he also drew on medieval chronicles and employed literary modes, such as allegory. The heavily annotated work of 44,000 words survives in four witnesses: Bodleian Don.c.43, Rawlinson MS A 124 and British Library Harleian MS 849, Cotton Caligula B.IV. The project is set to produce important spin-off articles, whether on the tract’s impact on the drama, political debate, or legal tradition.

We envisage this opportunity to be appealing to students of English Literature, History, Law, Politics, and Theology. Some familiarity with palaeography is essential; some knowledge of Latin and French is desirable. Further training will be provided. The applicant should be interested in some aspect of the relations between early modern English and British history, political thought, law and literature. Supervision would be provided in three key areas of expertise: Professor George Garnett will advise on the legal framework and use of Latin chronicles; Professor Paulina Kewes on the royal succession, Shakespeare and political culture; Professor Lorna Hutson on Anglo-Scots relations, on Plowden’s literary strategy and on political theology.