The Reformation beyond Print 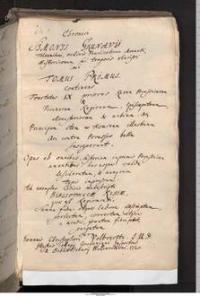 Reformation-printing-modernity is a classic triad. Paradoxically, however, the very first European cities to experience full-blown urban Reformation did not have established local printing industries – their religious and political revolutions were instead conducted largely in manuscript. They were the Hanseatic cities of Danzig/Gdańsk and Elbing/Elbląg, German-speaking Baltic ports within the Polish monarchy. In 1525, both were stunned by popular revolts, as Luther-inspired reformers overthrew city governments, destroyed images and expelled clergy. Nothing comparable occurred elsewhere in Christendom until the following decade. The Danzig and Elbing Reformations, and subsequent local debate about them, generated a superbly rich corpus of manuscripts – e.g. the extraordinary Preussische Chronik by the Dominican Simon Grunau (d.1529), city-chronicles, satire, songs celebrating the revolt such as Ein Lied von Auffuhr anno 1525, and apologias and manifestos by the rebel leadership. The ports of Polish Prussia were at the cutting edge of the early Reformation, but at the margins of the printing revolution. Here, we can thus see these two famous steps towards ‘modernity’ decoupled, making the revolutionary cities an excellent case study for probing the power of publication beyond print.

Since the 1980s, historians have tried to complicate the relationship between Reformation and printing, by stressing the role of other media such as ritual performances (Scribner) or material culture (Walsham). Yet in no sense has printing yet been decentred in Reformation history. Rather, its edges have been blurred, as we increasingly recognise that for contemporaries the distinction between printed and handwritten text was not necessarily very sharp. The manuscripts of these precocious Baltic Reformations, found today in archives in northern Poland and Berlin, have been sorely neglected by scholars since the 19th century. Yet they raise big questions in communications history, speaking to issues of reproduction/materiality, audience and authority. These manuscripts reveal, for example, the porous interface between not only print and manuscript, but also orality and aurality, and their mutual hybridisation. They challenge claims that printing was uniquely polemical: these are vividly partisan manuscripts which actively sought to shape new, antagonistic civic and religious identities in Prussia (both pro- and anti- Reformation).

This interdisciplinary doctoral project will read these manuscripts in light of current debates in the history of the Reformation, of Poland/Prussia, and the book. Crucially, it will also read them for the first time as literary artefacts, setting them in the context of late medieval German religious literature and/or the role of song. The projects requires the skill to handle materials in their original language. The candidate will have excellent Polish or German at the start of the project, as well as the ability to consolidate knowledge of the other language with training. They will acquire expertise in Central European history, which is in short supply in the UK, providing too a new generation of scholarship in the UK on pre-modern German language and literature. The proposed History supervisor has written a history of the early Reformation in Poland-Prussia (OUP, 2018), and published on early printing in journals such as Past & Present. The proposed German supervisor has published on religious writing in Pomerania as well as the role of religious song, and co-edited a book on medieval and early modern polemic.

Candidates are required to apply for the DPhil in Medieval and Modern Languages by 11 January 2019. The scholarship will cover tuition fees, colleges fees and provide a living allowance at Research Council rates. Candidates from all backgrounds are welcome to apply, although the Leverhulme Trust has a preference for supporting Home/EU candidates.