Under Pressure: Women Commissioning Manuscripts in a Time of Print 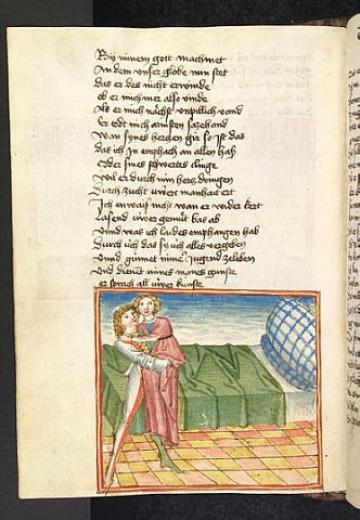 What happens to manuscript production in a time of print? This DPhil project looks at how commissioning manuscripts takes on new significance in the incunable period. The second half of the 15th century is one of the most exciting periods to study in terms of interaction of different forms of text culture. This is particularly true for Germany, where Gutenberg’s invention of printing with moveable type originates. From 1450, manuscripts cease to be the default form of circulation of text. Under this pressure from the printing press, manuscripts develop in new directions and shift in shape and scope. The primary focus of the project will be on those who commission vernacular illuminated manuscripts in Germany once printing becomes the default form of text circulation. The topic is set to explore why such a high proportion of manuscript commissions come from noble women. Margarethe von Savoy, Mechthild von der Pfalz, and Elisabeth von Nassau-Saarbrücken are just three cases among a high profile network of literary interests, family relationships and linguistic prowess, with all of them speaking and writing several languages fluently.

There are different directions to this proposal which could be explored:

The hypothesis behind this cluster of research questions is that under the pressure of the success of the printing press, manuscripts develop new significance as representative objects of courtly culture especially for noble women.

This project is supervised by Professor Henrike Lähnemann.