The Vedas: the Once and Future Scriptless Texts 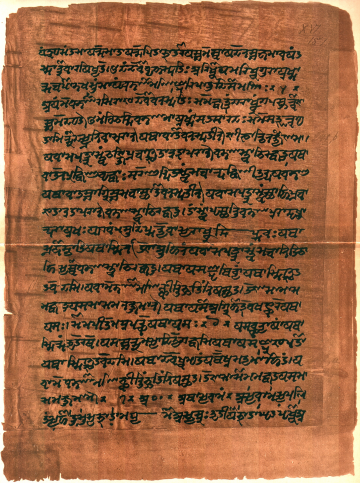 In the history of global culture, perhaps the best known example of an elite tradition that preserved and circulated a large corpus of canonical literature across an entire continent, durably and independently of writing, is the tradition of the Vedas. Of Sanskrit texts, the Vedas were the most famously script-averse, and were probably the last to be written down. Preserved instead by intricate systems of verbatim memorization and by institutions of oral transmission, the Vedas were maintained with extraordinary fidelity over more than twenty centuries. As the custodians of the Veda, the Brahmins enjoyed a privileged status in Indian society, and by virtue of their memory systems were able to circulate their texts widely across the subcontinent while keeping a tight grip on their access.

Over the last two centuries the Vedas were put into print by publishing houses in India, Europe, and elsewhere. The era of printed Vedas coincided with a decline in the number of living Vedic recensional schools (śākhā). Recently, however, there has been a resurgence of the institutions that transmit the Veda orally - the traditional schools (maṭha, pāṭhaśālā) - and a resuscitation of śākhās that had been thought nearly or entirely lost. Old settings for public, performative examination and competition have returned, and new forms of institutional support are in evidence as well.

At least two factors drive this resurgence: the new economic prosperity of the middle and finance classes in India, and the arrival of the telecommunications revolution. Recordings of Vedic recitations and rituals, and of competitions, speeches and discourses are available now on the internet, together with the full panoply of new communicative modes: blogs, chatrooms, sites, pages, and so on. For the most part, private funding has backed these developments, motivated by a wish to ensure India’s future by reconnecting with its Vedic past. The patriotic sentiments have differing political ambitions: for a Hindu national culture, conceived as largely free of caste; for the return of the eternal dharma and Brahminical supremacy; for the return of ancient tradition simply because it is ancient; or for the sake of reforming India’s religious culture.

The study of the Vedas’ new life beyond print therefore presents a new research possibility: one that occupies the intersection of Indology, religious studies, anthropology, sociology, memory studies, and orality studies.

This project is supervised by Professor Christopher Minkowski.