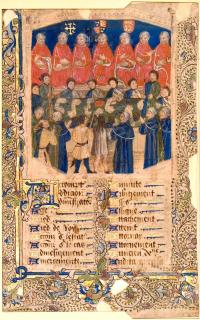 Between 1250 and 1550 the local courts of medieval England (church, manorial, borough and others) recorded the complaints and offences of hundreds of thousands of ordinary men and women, most of them illiterate. This was a widely-prevalent and underappreciated form of ‘vicarious publication’.

Many manuscript records of English manorial, borough and church courts were made, kept and known within the communities whose disputes and transgressions they recorded. Such records are therefore not just collections of stories told in order to persuade, but of stories told in order to be recorded, stored, remembered, and retrieved: in other words, to be published. Vicarious publication may indeed have been one of the goals of people who used local courts, an element in their search for justice. This fact contains within it the potential to understand individual agency and publication in a wholly new light. The later Middle Ages was a period in which huge numbers of people had access to a means of publicizing subjective experiences in written form. They did not have complete control over the medium, but they used it regularly, creatively, and meaningfully, and we ought not to neglect it as a chapter in the history of publication.

This doctoral project will advance beyond several existing areas of research into how people navigated the law and told strategic stories as litigants and witnesses. We know about the ‘composite authorship’ of medieval judicial records (Zemon Davis, 1987; Farge, 1989), the ‘pragmatic literacy’ of the people who used them (Clanchy, 1979; Britnell, 1997), and the status of reported speech within them (Arnold, 1998; Johnson, 2014). However, the production of these records has not hitherto been an element in the history of publication. This doctoral project will explore the nature of vicarious publication through institutional record-making. It may be a case study based on a single place or court, or a comparison looking at difference.

Candidates should think about the following possible areas for research as the springboard for developing their own proposal:

•        the ways in which people used manorial, borough, or church courts as media for vicarious publication;

•        how region, gender, status, and (il)literacy conditioned the subjective experience of publication through institutional record-keeping;

•        how vicarious publication aided the resolution of different sorts of dispute, whether of debt, defamation, sexual misconduct, violence, anti-social behaviour, or religious deviance;

•        whether Latin was valued as more authoritative or English prized as more accessible;

•        what audiences were imagined for this vicarious publication;

•        how the balance between institutional power and individual or local agency was affected by vicarious publication.

The doctoral project should be based primarily on un-edited documents which the student will identify in conjunction with the supervisor. Candidates should have a solid grounding in Latin (at least one year’s study) and some experience in palaeography and handling original medieval records. Further training will be available.

Candidates are required to apply for the DPhil in History by 10 January 2020. The scholarships will cover tuition fees, colleges fees and provide a living allowance at Research Council rates. Candidates from all backgrounds are welcome to apply, although the Leverhulme Trust has a preference for supporting Home/EU candidates.