Everyone knows a Dave. But how many of us know an Apollonios?

Apollonios, Ἀπολλώνιος in its original Greek, is derived from the name of the God Apollo, and was a popular name in the Ancient World.

And a long-running project in the Classics Faculty has spent the past 45 years collecting and recording thousands and thousands of similar names—to create a dictionary all of the personal names that men and women went by in Ancient Greece. These names can give fresh insights into Ancient Greek society. 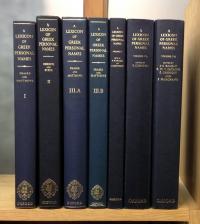 The Lexicon of Greek Personal Names (LGPN) was established in 1972. Its aim is to scour Ancient Greek literature, inscriptions, graffiti, coins, vases, and other artefacts, and create a dictionary of all of the names found in them.

By collecting all of these names, researchers hope to shed light on the social history of the Ancient Greek world. Names can help us to understand how religion shaped society, how naming patterns changed, and even how some Ancient Greek names have survived to this day.

Take Apollonios (Ἀπολλώνιος). Because it derives from the God Apollo, is it known as a ‘theophoric’ name—a name that comes from the Gods. This sort of name was common in Ancient Greece, and give us an insight into which Gods were important at different times.

“The names reflect various levels of religion and piety,” says Dr. Michael Zellmann-Rohrer, a researcher for the LGPN project. “It’s a much richer record than literary texts or even temples.”

This is because, while it may be normal to find tributes to Gods in temples, naming your beloved child after a God shows a much stronger sense of devotion. “Parents are expressing their relations to the Gods in the

These days, theophoric names like Apollonios or Demetria—after the goddess Demeter—are not so common in English. But some traditions have stayed around.

“I was named after my father,” says Dr. Zellmann-Rohrer. “Naming a child after a parent or grandparent is quite common—and people did it in Ancient Greece too.”

So chances are that Zosimos (Ζώσιμος) might well decide to call his baby daughter Zosime (Ζωσίμη), just as Dave might decide on Davina.

And some names have even lasted to the present day.

“For various reasons, Greek names do continue, some of them via Christianity,” Dr. Zellmann-Rohrer says. One example is Theodore, which comes from Theodōros, and means “God’s gift.”

In the volumes, which are organised by region, researchers record all the names they find, where they found them, and note any well-known individuals who bore the name.

It’s a huge task, but has benefited from being collaborative from the beginning. A small group of researchers work on the project full-time from their Oxford office, but are supported by an international community of scholars.

“It’s one of the good traditions of the project,” says Dr. Zellmann-Rohrer. The volumes are also available online, so that everybody can access and learn from them.

Currently, Dr. Zellmann-Rohrer is working on the Near East, combing sources for names from that area. He works alongside Professor Robert Parker and Dr. Jean- Baptiste Yon, the co-Principal Investigators, and Mr. Richard Catling and Dr. Jean-Sébastien Balzat, who are co-editors.

To explore the world of Ancient Greek names, or see if you might have Greek roots yourself, visit the LGPN website.